User-generated content (UGC) refers to content — photos, video, text, etc. — that’s created and published by unpaid contributors. And it’s a big win for brands. When consumers post about a brand on social media, they influence their followers’ buying decisions. In fact, 85% of people say UGC is more influential than content made by brands directly, according to Adweek. What makes it so successful? Let’s take a look at some user-generated content (UGC) examples and explore why they work so well.

These UGC examples will help you get an idea of what’s going on in the market so you can produce better content. Keep reading. 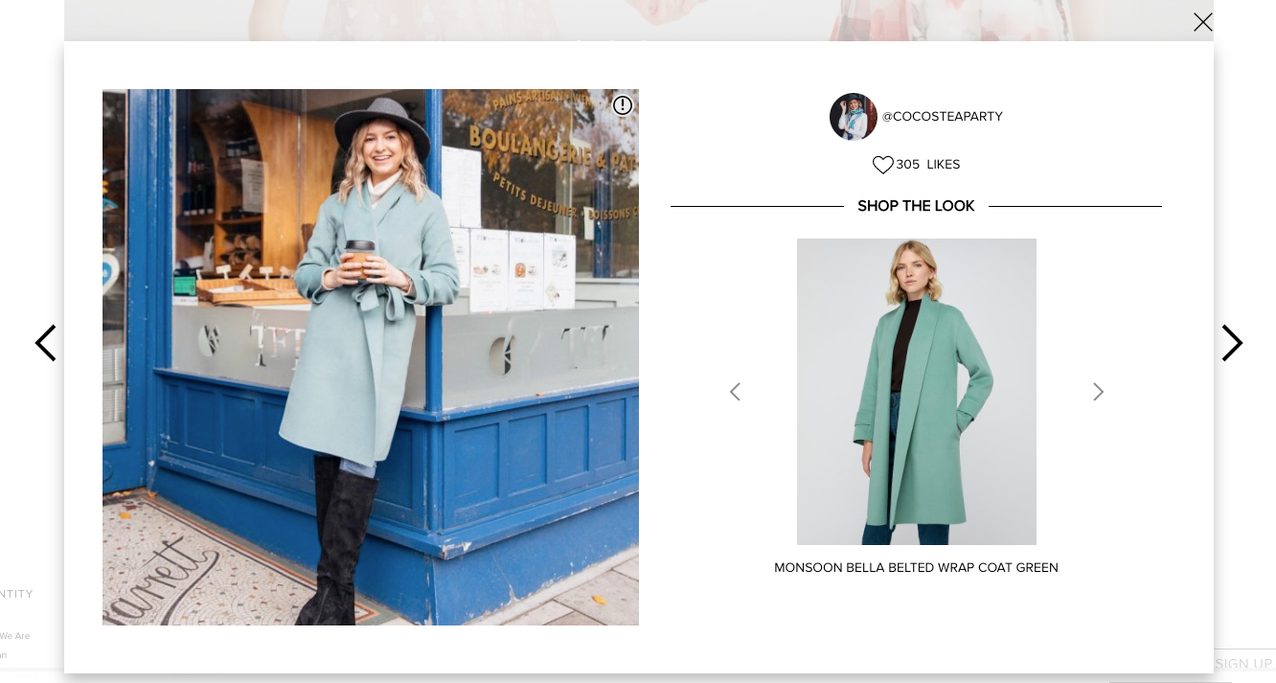 On its website and social media, fashion retailer Monsoon asks shoppers to share photos of its products with the hashtag #MyMonsoon.

These images are pulled into on-site galleries, enabling consumers to easily shop the looks they see. And when Monsoon started using this same UGC in its email campaigns, the click-through rate increased by 14% and revenue by 3%.

This kind of imagery enables shoppers to more easily picture how individual items will look on them because they can see real people — not just models — wearing and enjoying the products.

But instead of just inspiring customers, Monsoon empowers them to take action. From the shoppable UGC gallery, consumers can make a purchase directly from the look they want to recreate. 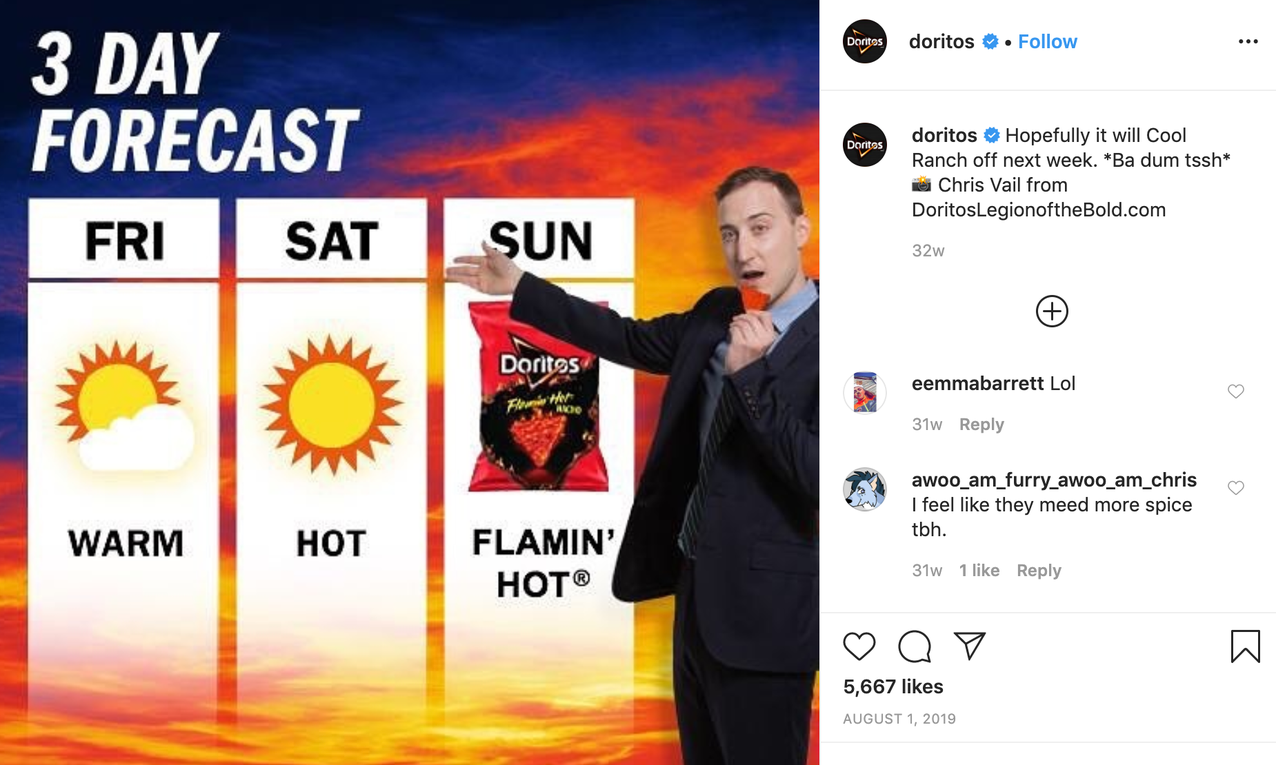 To keep users engaged with its brand, Doritos launched doritoslegionofthebold.com, a site where users can create branded images and videos that Doritos shares on its social media accounts.

Fans have created everything from snack-centric weather forecasts to pictures of themselves lounging in piles of nacho chips. Doritos keeps users engaged on the site with public challenges, such as its “oddly satisfying challenge,” which invites creators to make “hypnotizing” videos for a chance to be featured in its Instagram Stories.

The content from this campaign is outrageous and funny, so it’s no surprise that it drives a lot of engagement.

But Doritos isn’t just sharing photos of people enjoying its product with its Legions of the Bold campaign. It’s actually driving users to its website and providing them with tools to create one-of-a-kind content. And giving fans the opportunity to create their own works of art makes consumers feel connected to the brand.

In other words, it’s a nacho-average UGC campaign. 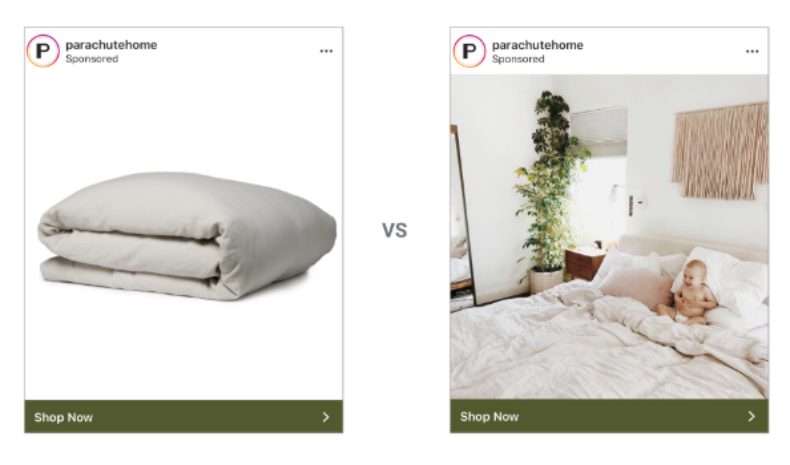 Direct-to-consumer bedding and bath brand Parachute encourages its audience to use the hashtag #MyParachuteHome in content featuring the company’s products. The parachute then repurposes customers’ photos into promotional content, not just social media posts.

For example, the brand uses UGC in retargeting ads, illustrating how real consumers use Parachute products. These ads, such as the right-hand one below, generated a 35% higher click-through rate and a 60% lower cost per click than ads that don’t feature UGC like the left-hand one below.

But Parachute doesn’t limit itself to implementing UGC in digital campaigns alone. The company also features UGC content on an insert card, enclosed in order boxes, that showcases how other buyers have made Parachute products a part of their home — and no doubt inspires consumers to snap some pics of their own and make another purchase. 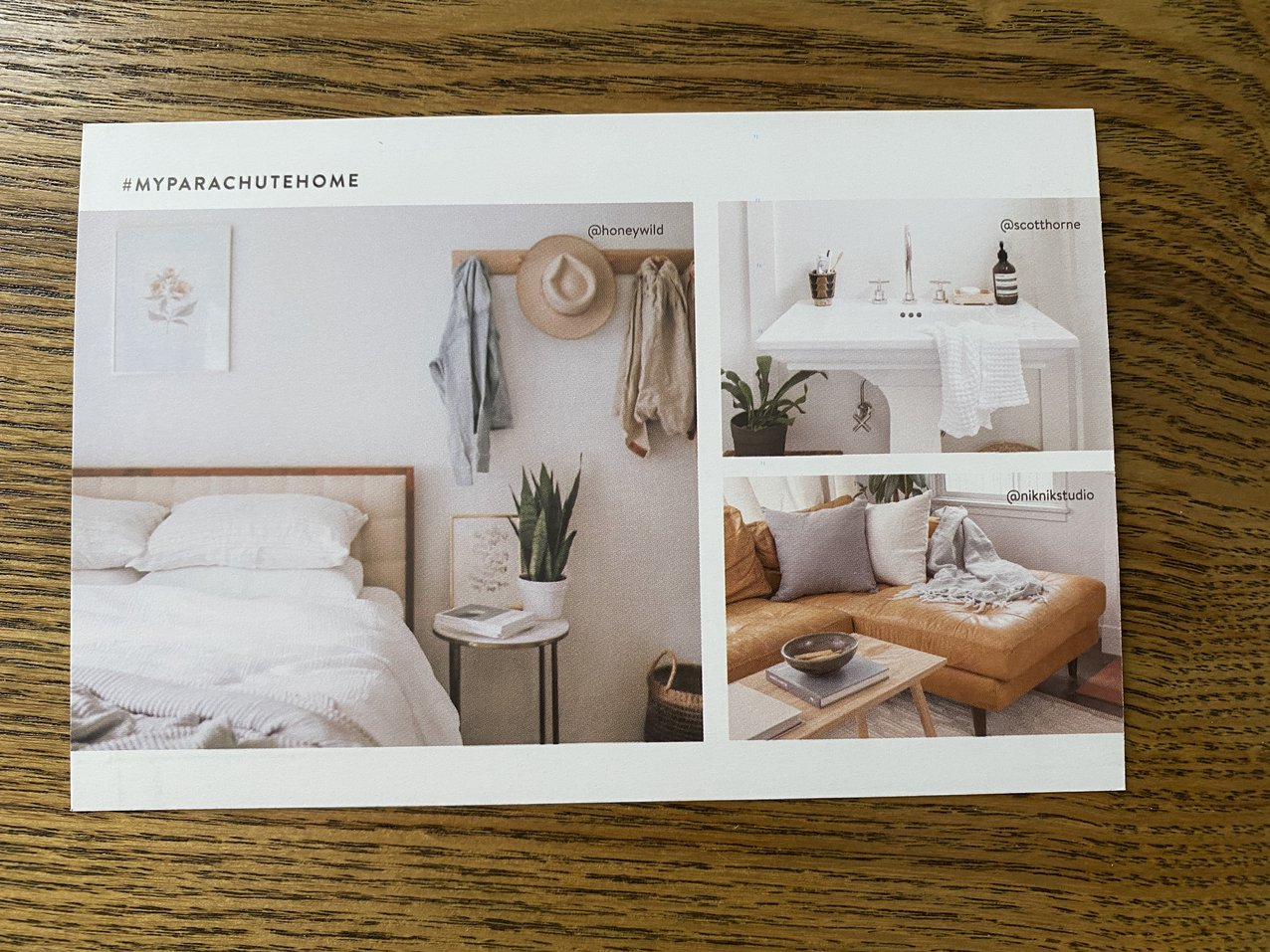 Many brands overlook opportunities to use UGC outside of organic social posts. Parachute, however, shows the value in repurposing this content and featuring it in ads, inserts, email campaigns, and more. 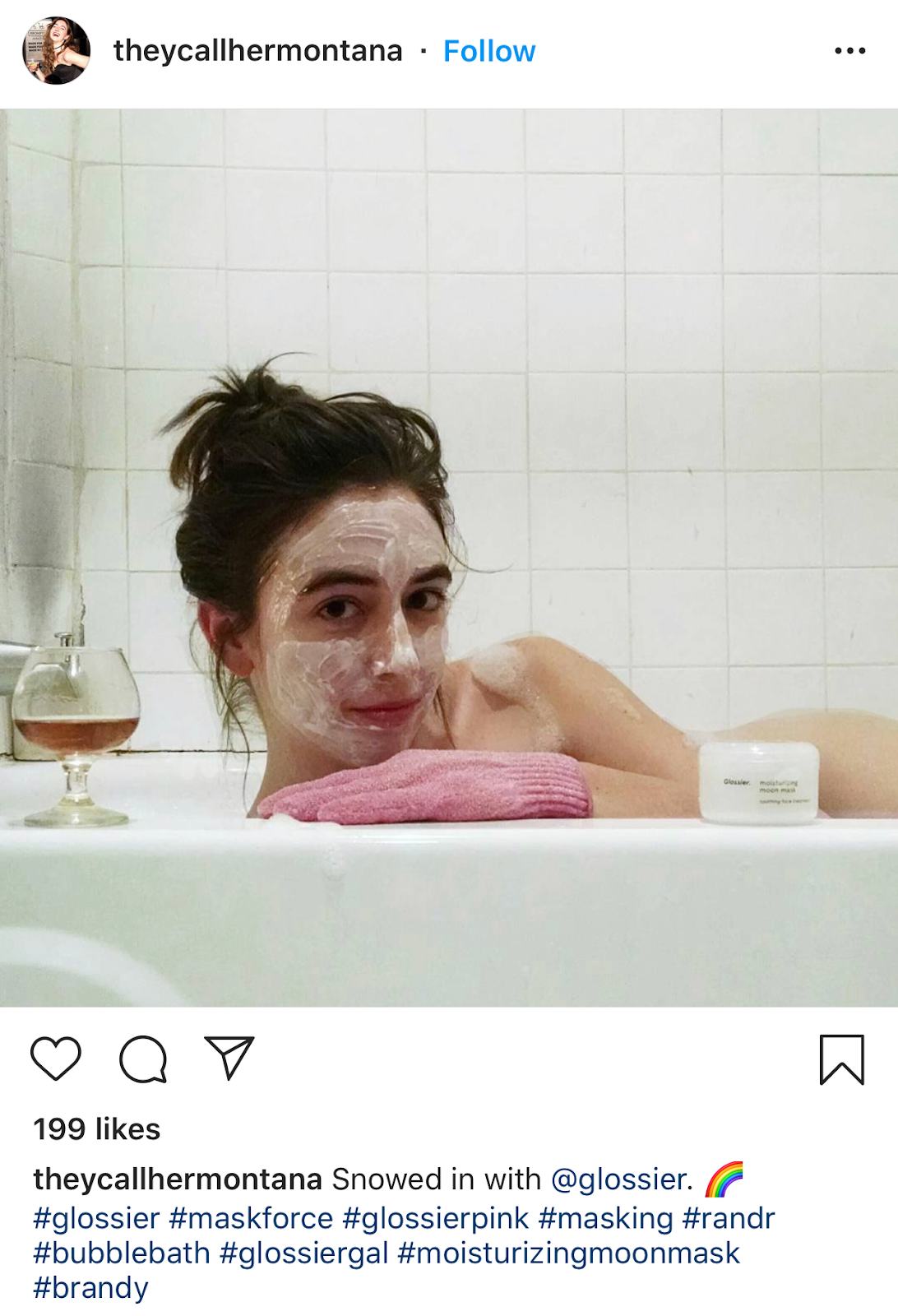 Beauty brand Glossier drives engagement with its social content by encouraging customers to get vulnerable and share their selfies. It does this by posting customer stories that are often heartwarming, as well as numerous photos of people using Glossier products.

In fact, the beauty brand relies more on customer-submitted imagery than it does on models and product shots. It even attributes 90% of its revenue to its fans, who eagerly take to social media to post photos of themselves using and wearing Glossier products.

For example, when the brand launched its Mega Greens Galaxy Mask, thousands of users shared selfies of themselves in the mask with the hashtag #maskforce, which Glossier reposted on its own social accounts.

Getting recognition is one of the key reasons we post on social media, so UGC gives followers the chance to step into the spotlight. And Glossier does this with compassion and flair.

The #maskforce selfies are unique, feminine, often humorous, and 100% real, making them right on-brand for Glossier. The company aims to make “every single woman . . . an influencer,” according to founder Emily Weiss, and Glossier’s sharing of user-generated content does exactly that, giving every user a chance to be the face of the brand.

5. Citizens of Humanity: Launch Campaigns with a Social Angle

For every photo posted with the hashtag, $10 is donated to the UN refugee agency the USA UNHCR.

This example of user-generated content is effective because it gets people involved in a worthy cause, and Citizens of Humanity is exactly the kind of brand that its target audience wants to be associated with. In fact, 75% of millennials believe it’s important for companies to give back to society. And campaigns that give back like this one drive engagement because users are eager to share how they participated.

Invite customers to post content with a specific hashtag, share user photos on social accounts, or add an on-site shoppable gallery, like Monsoon’s. Brands can also create opportunities for fans to interact with branded merchandise as La Croix did, or direct users on site to make original content like Doritos did.

By making user-generated content an integral part of your marketing efforts, you’re giving potential buyers an authentic look at what your customers think of you rather than simply providing them with your brand’s perspective.